TRACKLAYING for Stage 2 of Package A of the United Arab Emirates’ (UAE) 1200km Etihad Rail project has begun in Al Dhafrah region in the west of the UAE, following an inauguration ceremony on January 7. 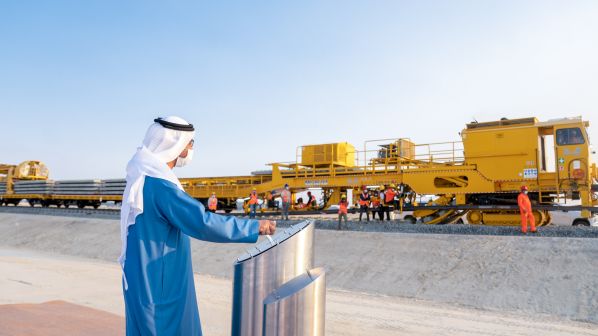 The event was attended by Sheikh Hamdan bin Zayed Al Nahyan, the ruler’s representative for Al Dhafra and Mr Falah Mohammad Al Ahbabi, chairman of the Department of Municipalities and Transport and an Etihad Rail board member as well as senior executives from the railway, including CEO, Mr Shadi Malak

Construction of the 139km Stage 2 Package A is being carried out by a joint venture between China State Construction Engineering Corporation Middle East and South Korea’s SK Engineering & Construction, under a Dirhams 1.5bn ($US 408.4m) contract awarded in March 2019.

The section runs from Ghuweifat on the Saudi Arabian border, to Ruwais, where the line will connect to the existing 264km line to Shah, which opened in January 2016.

The work, which began in February 2020, is now estimated to be around 59% complete, with around half of all soil preparation works complete, and 79% of sand removal and rock clearance also finished.

Stage 2, which is comprised of four packages, is part of the wider Etihad Rail project, which aims to create a new national network for the UAE, and will connect Ghuweifat with Fujairah and Khorfakkan on the east coast via Abu Dhabi and Dubai.

Construction on Package B, a 216km section which includes links to Khalifa Industrial Zone Abu Dhabi, Khalifa Port and Industrial City of Abu Dhabi, got underway in April 2020.

For detailed data on railway projects from around the world, subscribe to IRJ Pro.