Etihad Rail says the 605km project is proceeding to schedule. 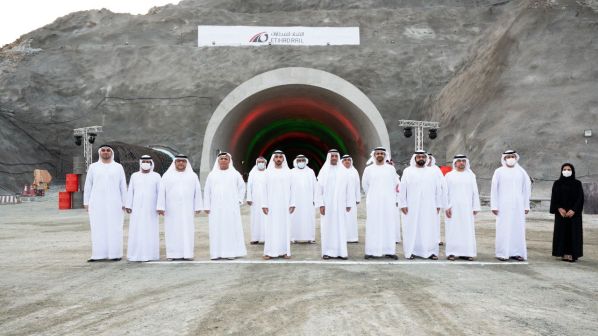 ETIHAD Rail has confirmed that all excavation of tunnels required for Package D of Phase 2 of the United Arab Emirate’s railway project has been completed.

The work covered nine tunnels in the Hajar Mountains, which in total extend over 6.9km in the Emirates of Fujairah and Ras Al Khaimah, and was delivered two months ahead of schedule. Etihad Rail says it took a series of precautionary measures to limit the impact of noise and vibrations caused by controlled explosions during the tunnelling process.

The work included the 1.8km T1 tunnel, which is described as the longest railway tunnel in the Middle East. It was carried out by the China Civil Engineering Construction Corporation (CRCC) and National Projects and Construction joint venture under a Dirhams 4.6bn contract awarded in December 2019.

Construction on Package A, the 139km section from Ghuweifat on the Saudi Arabian border to Ruwais, the terminus of Stage 1 of the project, was completed in September. Etihad Rail says the remainder of the 605km Phase 2, which extends from Ghuweifat to the Omani border via Khalifa Port in Abu Dhabi and Jebel Ali Port in Dubai, is proceeding to schedule, although no date has been given for completion.