REPRESENTATIVES of Riyadh's Fast Consortium, Arriyadh Development Authority, and residents of the district of Salah Al-Din attended a ceremony at the site of the future Salah Al-Din station on October 4 to witness the first tunnel boring machine (TBM) breakthrough on Riyadh metro Line 5 (Green Line). 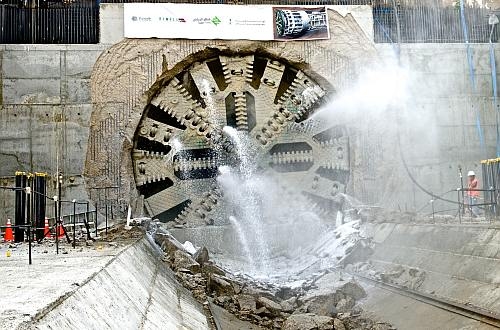 TBM San'ah was launched at the new Ministry of Education building on June 30 and has completed 1.2km of the 5km tunnel it will construct for Line 5. San'ah will continue to Riyadh Airbase Roundabout, where it is expected to arrive in mid-2016. Here it will meet another TBM, Dhafrah, completing the 12.9km tunnel.

The north-south Line 5 will link an interchange with Line 2 at Sahara Mall with King Abdulaziz Historical Complex station on Line 1, running underground for its entire length.

The Fast Consortium, which comprises Alstom, Atkins, FCC, Freyssinet, Samsung C&T, Setec, Strukton and Typsa, was awarded a $US 7.8bn contract last year to build and equip lines 4, 5 and 6 as part of the city's ambitious $US 22.5bn metro programme, which will see the completion of a 176.5km six-line network within five years.