THE UAE Ministry of Finance and the Abu Dhabi Department of Finance have signed an agreement to finance Stage 2 of the Etihad Rail network. 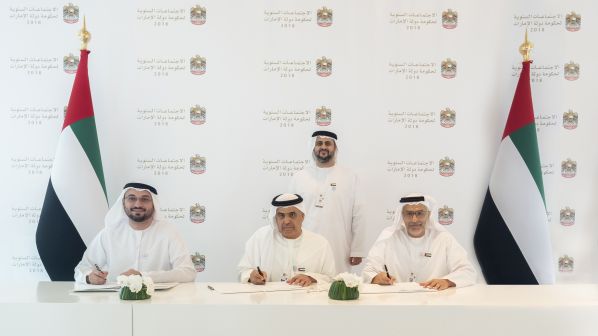 The second phase envisages construction of a 600km link from Ghuweifat on the border with Saudi Arabia in the west to Fujairah on the east coast. The project is expected to increase the annual volume of goods transported by rail in the UAE from 7 million tonnes on the Stage 1 network, a 264km link from Shah to Habshan and Ruwais, to more than 50 million tonnes.

The value of the financing agreement was not disclosed.

The signing took place on the sidelines of the second annual meeting of the UAE government to discuss development topics that aim to unify the government’s work at a national level. The agreement was signed by minister of state for financial affairs, Mr Obaid bin Humaid Al Tayer, head of the Abu Dhabi Department of finance, Mr Abdul Rahman Al Mubarak, and Etihad Rail.

Etihad Rail recently completed preliminary designs for Stage 2 and says that it is preparing to launch tenders for civil works by the end of this month. Etihad Rail awarded Jacobs Engineering, United States, a contract to provide technical and programme consulting services for the project in July, while Egis, France, is providing project management consultancy for Stage 2 and Stage 3, which envisages the construction of a further 250km.

Etihad Rail is targeting completion of both phases by 2024.

“The network will help to support future growth with a sustainable, safe, modern and cost-effective transport system, as well as contribute to reducing the number of vehicles on the roads, which will yield tangible benefits from both economic and environmental perspectives,” Al Nahyan says.

For up to date information on railway projects from around the world, subscribe to IRJ Pro.