Project will enable double-stack container trains to operate from the Port of Mobile. 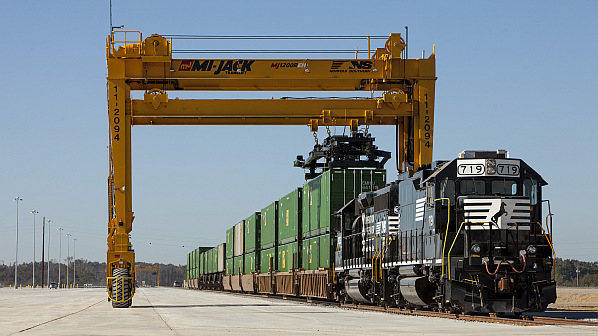 ALABAMA governor, Ms Kay Ivey, has announced plans for a $US 231.6m programme of infrastructure upgrades designed to improve rail freight flows from the Port of Mobile.

Class 1 operator Norfolk Southern (NS) will provide more than 50% of the funding as part of a public-private partnership. The state is investing $US 5m the project, which has been named the Alabama-USA Corridor, with the remaining funds provided by current and future Consolidated Rail Infrastructure and Safety Improvements Program (CRISI) grants via the Alabama Department of Transportation, in partnership with NS.

The first phase is a $US 71.6m project linking the Port of Mobile with the McCalla intermodal facility near Birmingham. This will include 12 separate projects covering track, signalling and yard improvements on NS lines between Mobile, Selma and Birmingham to allow for trains to carry double-stack containers. NS told IRJ’s sister publication Railway Age that work could start in summer 2023, subject to grant awards in 2022.

The 450km corridor will link economic development sites in Etowah, Shelby and Washington/Mobile counties. A fourth site is planned at Jefferson County.

For details on infrastructure projects in North America, subscribe to IRJ Pro.