Amtrak 2015 budget: "something has to change"

AMTRAK submitted its budget request to Congress for 2015 financial year on March 18 with a warning to the federal government that failure to step up investment in the United States' passenger rail infrastructure could put the system at risk. 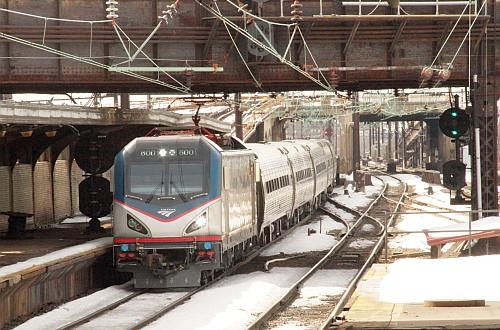 In a statement, Amtrak says that continuation of current funding levels on the Boston – New York – Washington DC Northeast Corridor (NEC), could leave its principal inter-city route "vulnerable to a bigger, costlier, and far more damaging failure than anything yet seen."

Amtrak is requesting a total of $US 1.62bn for the 2015, a 16% increase over the amount allocated for the current financial year. A federal capital grant of $US 445m is being requested for the NEC to help fund planned investments of $US 735m on the route. However it says capital investment in the NEC will need to rise to $US 1.65bn by 2018 in order to stabilise infrastructure, improve reliability, and implement enhancement projects.

Amtrak points out it has actively cut operating costs across its network in recent years while sustaining increasing revenues, with the result that cost recovery reached 89% in 2013, and is expected to increase further to 91% in 2015.

"If America wants a modern inter-city passenger rail system, the problems of policy and funding must be addressed," says Amtrak president and CEO Mr Joe Boardman.

Boardman is calling for new federal funding arrangements to create a multi-annual capital investment programme to reverse many years of decay on the NEC and support other passenger rail projects.

According to Amtrak, NEC services currently generate annual revenues of more than $US 300m and help to cover the cost of some of the state-sponsored and long-distance services it operates elsewhere. It says Congress should fully fund the capital needs of long-distance routes so NEC revenues can be ploughed back into improving the route.