AMTRAK announced on August 26 that it has awarded Alstom a contract to supply 28 high-speed trains for the Washington DC - New York - Boston Northeast Corridor (NEC), which will replace the existing Acela fleet and provide additional capacity on the 730km route. 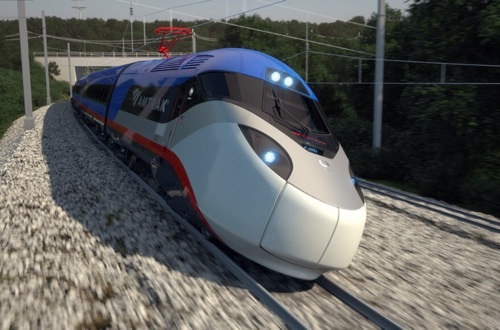 Alstom will also provide long-term technical support and components under a separate contract. The two contracts have a total value of around $US 2bn.

The Avelia Liberty sets will be formed of two compact power cars and nine intermediate trailer cars. Each train will accommodate 33% more passengers than the Acela sets they are due to replace. Alstom says it will be possible to lengthen the trains with up to three additional passenger vehicles if required.

The articulated trains will be capable of operating at up to 300km/h but will initially be limited to a maximum of 257km/h.

The trains will be equipped with Alstom's crash energy management system and Tiltronix active tilt technology.

The trains will be built at Alstom's plants in Hornell and Rochester in New York and a pre-series set will be delivered for trials in 2019.

The fleet will enter revenue service from 2021 onwards, enabling the withdrawal of the Acelas by 2022. With additional trains, Amtrak says it will be able to offer half-hourly peak Acela Express services between Washington DC and New York as well as hourly New York - Boston services.

Amtrak is funding the acquisition of new rolling stock and infrastructure enhancements through a $US 2.45bn Federal Railroad Administration's Railroad Rehabilitation & Improvement Financing programme, which will be repaid through growth in NEC revenues.

The loan will also fund improvements at Wahington Union Station and Moynihan station in New York, as well as modernisation of depot facilities in preparation for the arrival of the new trains.

Ridership on Acela Express services increased from 2.5 million in the 2002 financial year to nearly 3.5 million in 2015.