ELECTED officials and Bart representatives joined community members for a ribbon-cutting ceremony on May 25 to mark the start of services on the 16km Antioch extension of the Bart network the following day. 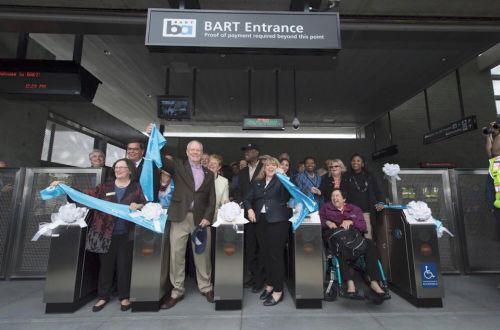 The standard-gauge line acts as a DMU shuttle service to the existing 1676mm-gauge Bart network and is expected to provide much-needed congestion relief on California State Road 4, with the alignment largely following the median of the highway. As well as the terminal, the extension adds a new station at Pittsburg Center and connects with the existing Bart network at Pittsburg Bay Point station, where passengers can alight from the DMUs and board conventional Bart trains used on the Antioch - San Francisco line.

The extension cost $US 525m, which Bart says is around half the expected cost of a project to extend existing electrified infrastructure. Stadler was awarded a $US 58m contract in 2014 to supply eight two-car GTW DMUs, which operate using renewable diesel, an advanced biofuel produced from bio-based sources such as vegetable oil. The vehicles were manufactured at Stadler’s plant in Bussnang, Switzerland.

“East County residents now have an environmentally-friendly, comfortable and state-of-the-art commute option,” says Bart director Mr Joel Keller, who serves East Contra Costa County and is among the local leaders who were instrumental in getting the extension built. “The Bart to Antioch extension will carry as many people as an additional lane of Highway 4 and will reduce vehicle miles travelled by 99 million per year.”

The new line is expected to serve up to 2400 passengers per direction per hour during peak times with trains operating at up to 120km/h.