BNSF Railway has unveiled details of major projects in its $US 6bn 2015 capital programme, the largest planned capital expenditure in the company's history, which was first announced last November. 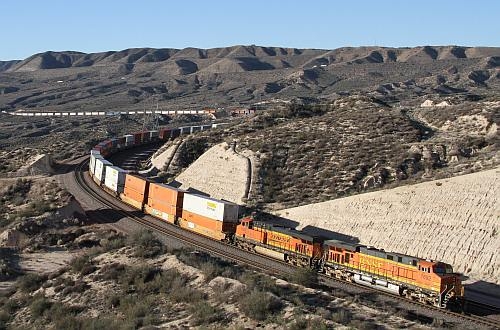 The investments include $US 2.9bn for the replacement and maintenance of the core network and related assets, nearly $US 1.5bn for expansion and efficiency projects, $US 200m for continued implementation of Positive Train Control (PTC), and around $US 1.4 billion for new locomotives, wagons, and other equipment.

In BNSF's North Region (Illinois, Minnesota, Montana, North Dakota, Oregon, South Dakota, Washington, and Wisconsin), the railway will spend around $US 1.5bn on infrastructure maintenance and enhancement projects, around $US 700m of which is allocated to PTC implementation. BNSF says its North Region has experienced the most rapid growth in recent years, largely thanks to the expansion of the shale oil industry.

In the Central Region (Alabama, Colorado, Iowa, Missouri, Nebraska and Wyoming), BNSF will invest $US 650m including $US 260m for PTC, while in the South Region (Arizona, Arkansas, California, Kansas, Louisiana, Mississippi, New Mexico, Oklahoma, and Texas), it will spend around $US 800m with $US 175m allocated to PTC.

Continuation of track-doubling on the Glasgow subdivision between Minot, North Dakota, and Snowden, Montana

Extension of loops on the Dickinson subdivision between Mandan, North Dakota, and Glendive, Montana, and expansion of facilities at Dickinson yard to accommodate expected growth in wagonload traffic.

Implementation of CTC on the Hillsboro subdivision in eastern North Dakota.

Extension of two loops on the Mojave subdivision, between Bakersfield and Mojave, California, to form a short double-track section

Track-doubling on the Panhandle subdivision between Wellington and Avard, Oklahoma

Track-doubling on the Clovis subdivision located between Belen and Clovis, New Mexico

Track-doubling on the Ravenna subdivision in Nebraska

Extension of six loops on the Brush subdivision east of Denver, Colorado.