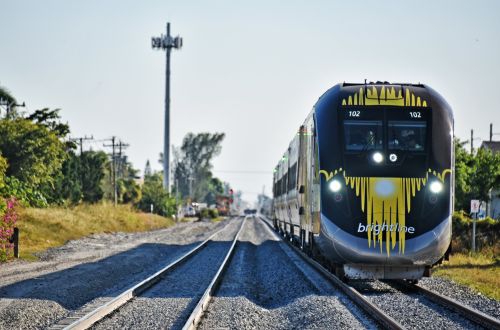 Brightline is initially operating 11 trains a day between West Palm Beach and Fort Lauderdale with a journey time of 40 minutes for the 75km trip. The introductory fare is $US 10 for Smart class and $US 15 for Select.

Services are due to be extended to Miami in the spring and Brightline plans to offer a 30-minute journey time from Fort Lauderdale.

The service uses Florida East Coast Railway infrastructure, which has been upgraded to enable 127km/h operation on the 107.8km section between Miami and West Palm Beach. Trains will be able to operate at up to 177km/h in the next 214km phase of the project to Cocoa.

Siemens has supplied five trains for the initial phase of operations. Each train seats 240 passengers and is formed of four coaches with a Charger locomotive at each end.

The introduction of services was marred by problems with the online booking system, which Brightline attributed to “overwhelming excitement.” Furthermore, on January 12, a 32-year-old woman was struck and killed by a train as she attempted to cross the line at Boynton Beach.