CALGARY Transit unveiled its first Siemens S200 high-floor LRVs on January 15 and says it is on course to introduce the new fleet on the CTrain light rail network this spring. 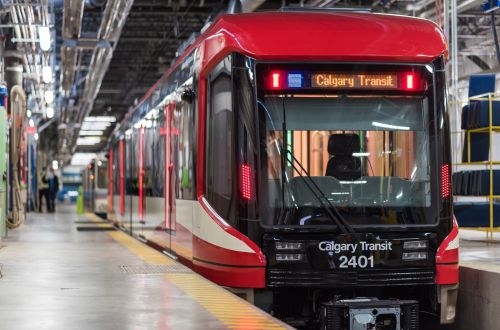 Calgary Transit signed a $C 192m ($US 132m) contract with Siemens in September 2013 for 63 S200s, which will support the introduction of four-car operation on the CTrain network and enable the withdrawal of the oldest U2 vehicles, which date from the opening of the system in 1981.

Assembly is being carried out at Siemens' plant in Sacramento, California, and deliveries are due to be completed early next year.

The vehicles will be known as Mask cars after the exterior design, which was inspired by an ice hockey mask and selected by the citizens of Calgary from three options in a public vote.

The vehicles are equipped with transverse seating at the cab ends, longitudinal seating through the centre of the vehicle with glass-panelled sliding plug doors and wide doorways to maximise ambient light. The front doors have also been moved back to improve passenger flow. The S200s feature LED lighting, an advanced passenger information and entertainment system, high-resolution exterior cameras, which provide 20/20 vision halfway down a four-car train, and CCTV.