CALIFORNIA marked the official start of construction on the state's high-speed network on January 6 with a groundbreaking ceremony at the site of the future high-speed station in Fresno. 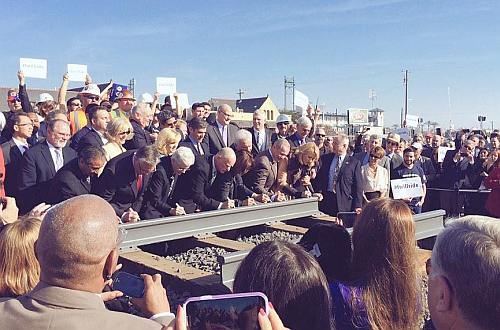 "We now enter a period of sustained construction on the nation's first high-speed rail system—for the next five years in the Central Valley and for a decade after that across California," Richard says. "This is an investment that will forever improve the way Californians commute, travel, and live. And today is also a celebration of the renewed spirit that built California."

Construction has already begun on the 45km northern stretch of the Initial Operating Section (IOS 1) between Fresno and Madera (construction package 1) in the Central Valley and in December CHSRA selected a consortium of Dragados, Flatiron, and Shimmick as preferred bidder for the design-build contract for the second segment of IOS 1. Construction package 2-3 covers the 97km stretch between East America Avenue south of Fresno and the border between Kern and Tulare counties northwest of Bakersfield.

The consortium submitted a bid of $US 1.2bn for the project, below CHSRA's estimate of $US 1.5-2bn for this section of the route.

Commercial services are not expected to begin operating on the IOS between Merced and Burbank until 2022 and CHSRA says it plans to launch through San Francisco – Los Angeles services "by 2029" with a journey time of less than three hours.