TRANSPORT Canada announced on July 23 that it will ban one-person train crews in response to the derailment and explosion of a freight train at Lac-Mégantic, Quebec on July 6, which killed at least 47 people. 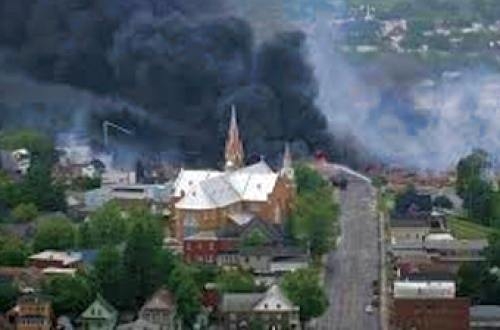 Transport Canada also said trains with dangerous goods would not be allowed to be left unattended on any main line track, and that hand brakes must be applied to trains left for one hour or more.

"The disaster brought to light several industry practices which have caused some concern," says Mr Gerard McDonald, assistant deputy minister of safety and security at Transport Canada. "Given that, and with an abundance of precaution, we thought it would be prudent to implement these measures now."

Transport Canada says the true cause of the Lac-Mégantic derailment remains unknown, although failure to apply a sufficient number of hand brakes is still suspected. Canada's Transportation Safety Board, which is investigating the accident, had asked for changes in regulations governing rail traffic.

Transport Canada is also giving rail operators five days to ensure nobody without authorisation can enter the cab of unattended locomotives on main lines or sidings.

The Montreal, Maine & Atlantic Railway (MM&A) had previously received permission from the Canadian authorities to operate with single-person train crews. Lac-Mégantic, in response, is taking legal action against MM&A, with Mayor Mrs Colette Roy-Laroche adding that the railway has failed to reimburse municipal workers for any of the cleanup costs involved in removing crude oil and explosion damage.