WHAT began with a 200-year flood event may now be brought to a close through legal action, as the Canadian government is following through with an ultimatum it issued to OmniTrax in October to repair its Hudson Bay Railway (HBR) line in 30 days or face a breach of contract lawsuit. 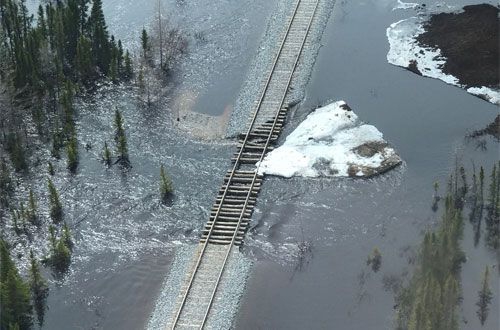 The line between Amery and Churchill has been inoperable since May 23 following flooding that requires repairs costing between $C 20m and 60m ($US 16.2m-48.6m). In September, the Canadian government formally demanded that HBR honour a 2008 agreement and repair the tracks, and on October 13 the government gave the railway 30 days to make the repairs.

On November 13, Canada’s minister of transport Mr Marc Garneau said the government will move ahead with its planned suit against OmniTrax as it has failed to resume operations on the Gillam - Churchill section of the HBR in Manitoba.

“Our government remains committed to the people of Churchill and northern Manitoba and we recognise the importance of the rail line for the community,” Garneau says. “We also believe it is important to hold OmniTrax accountable and that is why we are moving ahead with legal action. We are optimistic that interested buyers can develop a viable, sustainable business plan towards owning and operating the line.”

Transport Canada says OmniTRAX did not fulfil its obligations under the terms of the contribution agreement it signed with the Canadian government in 2008. Under the terms of the agreement, the government provided $C 20m for the rehabilitation of the line between The Pas and the Port of Churchill. Transport Canada says it has paid out $C 18.8m to date.

According to Transport Canada, the agreement requires that OmniTrax operate, maintain and repair the entire HBR in a diligent and timely manner until March 31 2029. It also specifies that the company must repay Transport Canada if it significantly reduces, discontinues, abandons or sells HBR.

OmniTrax has argued that the line is not commercially viable and should be viewed as a public utility. “We recognise this position has frustrated many, but it has become the inconvenient truth for Churchill,” Mr Merv Tweed, president of OmniTrax Canada, said in a statement issued in October.