CANADIAN Pacific (CP) made a further move in its bid to merge with Norfolk Southern (NS) on December 8, seeking to quell shareholders' concerns over financial terms and regulatory approval. 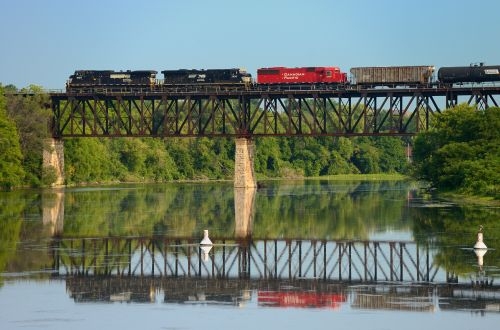 Harrison says that CP would be prepared to close the transaction into a voting trust to allay the concerns of NS shareholders who fear a long and onerous regulatory approval process. This would give NS shareholders a "substantial cash payment and shares in a new investment grade company" which would be listed on both the New York and Toronto stock exchanges.

CP says NS shareholders will receive $US 32.86 in cash and 0.451 shares of stock in a new company when the transaction closes, and estimates the total value of the stock and cash consideration to NS shareholders would be $US 125-140 per share at this stage of the process. This equates to a 37-53% premium on the closing price of $US 91.52 on December 7.

Last week the board of NS unanimously rejected CP's original bid, describing it as "grossly inadequate" and arguing that the company is already well positioned to deliver "compelling value" to shareholders through its existing business strategy.

To evaluate the regulatory prospects of the merger, NS appointed former Surface Transportation Board (STB) commissioners Mr Francis Mulvey and Mr Charles Nottingham to reviewed voting trust issues and the CP merger. Mulvey and Nottingham concluded that the structure originally proposed by CP is "highly unlikely" to be approved by the STB. The full findings of the review were published on the NS website on December 7.

NS said on December 8 that even under the terms of the revised offer, STB approval remains unlikely.

A survey by Cowen and Company, United States, indicates the propsoed merger would also be unpopular with customers, finding that 71% of rail shippers are opposed to a CP-NS combination. Only 59% are opposed to the broader notion of Class 1 mergers.

"Given the opposition to a CP-NS merger by a majority of shippers, some of whom appear passionate about their stance, and considering NS management's rejection of CP's offer, we believe CP's vocal commitment to pursuing a transaction could weigh on the company's shares in the near-to-intermediate term," says Cowen and Company managing director Mr Jason Seidl. "On the other hand, NS and any other carriers that may be viewed as potential targets for future consolidation, namely CSX and Kansas City Southern (KCS), may see their shares outperform peers. At this point, CP could either sweeten the offer or decide to go directly to NS's shareholders. In either case, NS shares should rise and lift shares of CSX and KCS somewhat. Whether it is a hostile takeover or a friendly merger, STB approval is likely to remain the biggest hurdle to overcome."