THE extension of the Los Angeles light rail network to Montclair moved a step closer to construction on September 28, when the board of the Foothill Gold Line Construction Authority approved draft advanced conceptual engineering documents for the 19.8km line from Azusa. 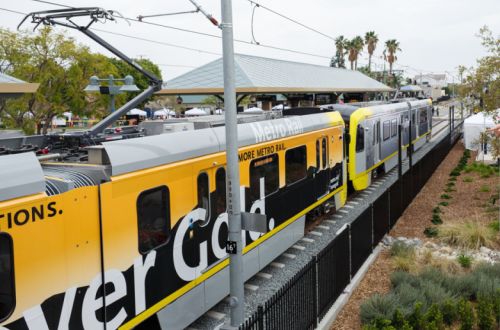 Work began on this phase of the project in autumn 2014 and has taken 35,000 hours to complete at a cost of $US 15m. Draft documents will now be distributed to local councils along the route as well as Los Angeles County Metropolitan Transportation Agency (LACMTA), Metrolink, and San Bernardino Associated Governments for a 60-day consultation.

The first phase of the Metro Gold Line from Union Station to East Pasadena was completed in 2003 and the 18.5km second phase to Azusa opened in March this year.

The third phase will include new stations at Glendora, San Dimas, La Verne, Pomona, Claremont, and Montclair and will utilise the alignment of a former Atchison, Topeka and Santa Fe (ATSF) heavy rail line, which was purchased by LACMTA in the early 1990s.

The $US 1.2bn third phase will largely be funded through a half-cent sales tax, subject to approval of the measure through a public ballot which is due to be held in November.