The Class 1s jointly filed a railroad control application with the Surface Transportation Board on October 29. 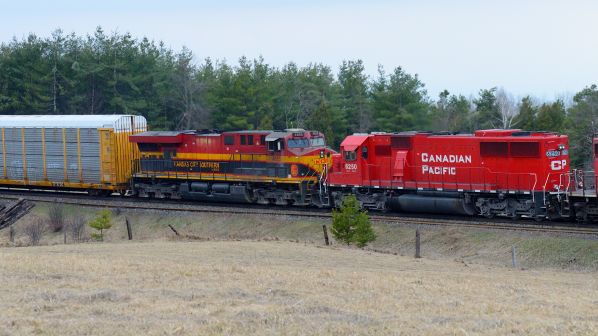 CANADIAN Pacific and Kansas City Southern have jointly filed a railroad control application with the US Surface Transportation Board (STB) to create Canadian Pacific Kansas City (CPKC), “the only single-line railroad linking the United States, Mexico and Canada.”

The railways say the comprehensive control application provides an overview of the proposed operational integration of the CP and KCS rail networks, the impact of that consolidation on the companies’ finances and labour needs, and the anticipated competitive and other benefits that will flow from providing shippers with new and better transport alternatives. Information in the filing outlines the public and customer benefits a CP-KCS combination would bring, including more efficient north-south trade arteries to support the interconnected supply chains of the United States, Mexico and Canada.

CP has agreed to acquire KCS in a stock and cash transaction representing an enterprise value of approximately $US 31bn, which includes the assumption of $US 3.8bn of outstanding KCS debt.

The STB review of CP’s proposed control of KCS is expected to be completed in the second half of 2022. Upon obtaining control approval, the two companies will be integrated fully over the ensuing three years.

The railways state that their customers will not experience a reduction in independent railway choices as a result of the CP-KCS combination, adding that the joint control application reiterates the applicants’ commitment to keep all existing freight rail gateways open on commercially reasonable terms, including the Laredo gateway between the US and Mexico. They state that it also shows how customers will not lose competitive routings because no new regulatory “bottlenecks” are being created and how the combined company will compete aggressively to attract traffic to its network via new single-line lanes between Canada, the Upper Midwest and the Gulf Coast, Texas, and Mexico.

In April 2021, the STB determined it would review the CP-KCS combination under the merger rules in existence prior to 2001 and the waiver granted to KCS in 2001 to exempt it from the 2001 merger rules. In August, the STB reaffirmed that the pre-2001 rules would govern its review of the CP-KCS transaction. On September 30, the STB confirmed that it has approved the use of a voting trust for the CP-KCS combination. CP noted its “ultimate acquisition of control of KCS’ US Railways is subject to STB approval,” adding, “The transaction is subject to approval by shareholders of each company along with satisfaction of customary closing conditions, including Mexican regulatory approvals. Shareholders are expected to vote on the transaction later this year.

While remaining the smallest of six US Class 1s by revenue, the combined company would have a much larger and more competitive network, operating approximately 32,000km of lines, employing close to 20,000 people, and generating total revenues of approximately $US 8.7bn based on 2020 actual revenues.

The merger partners expanded upon the economic benefits they’ve consistently maintained a CPKC combination will generate by citing many other public benefits:

“We are excited to file our joint application for this unique, pro-competitive combination and once-in-a-lifetime partnership,” says Mr Keith Creel, CP president and CEO. “CPKC is an extraordinary opportunity to inject new competition and new capacity into the US rail network, further USMCA trade flows, improve safety, grow employment and facilitate new passenger services. We are ready to work with the STB as the board gives this transaction a thorough and appropriate review, and ultimately look forward to approval so we can get to work delivering these benefits to the North American economy.”