CRRC Sifang America has hired the first 70 employees for its new $US 100m Chicago facility, where it will assemble 7000-series metro trains for Chicago Transit Authority (CTA). 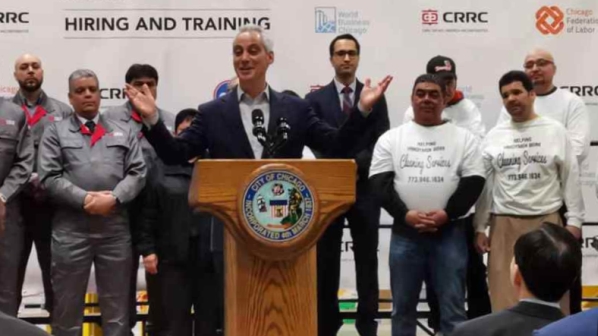 Chicago Mayor Mr Rahm Emanuel speaks during the announcement that CRRC has hired the first employees for its new site.

CRRC broke ground in March 2017, and plans to hire up to 170 manufacturing, warehouse and professional employees for the new 35,391m2 facility located at an 18-hectare site in the far southeast side of Chicago. The first group will travel to China for specialised training in assembling the new 600V dc third rail trains while the Chicago facility is completed.

“As we complete the new Chicago facility, our newly hired workers will be training in preparation to build the first 10 prototypes of the new 7000 Series cars to be delivered later this year,” says CRRC Sifang America president, Mr Chengyong Liu.

The first order is slated to replace CTA’s oldest rolling stock, the 2600 series trains supplied by Budd between 1981 and 1987. The CRRC trains will be the first produced in Chicago since 1964.

The 7000 series’ features include ac traction motors for a smooth, quiet ride as well as additional security cameras both inside and outside the vehicle, GPS-triggered announcements and automatic passenger counting for improved service planning.

CRRC’s success in Chicago followed securing the Orange/Red Line contract in Boston in 2014, which prompted the manufacturer to build a vehicle assembly plant in Springfield, Massachusetts, before it was award the Chicago contract.

CRRC clinched a third contract for Los Angeles Metro for $US 647m in 2017 as well as a much smaller contract with the Southeastern Pennsylvania Transportation Authority (Septa) in April 2018.