THE US National Transportation Safety Board (NTSB) has determined that the driver of a Washington DC - New York Amtrak Northeast Regional train which derailed near Philadelphia on May 12 2015 was likely to have been distracted by radio traffic causing him to forget where he was. 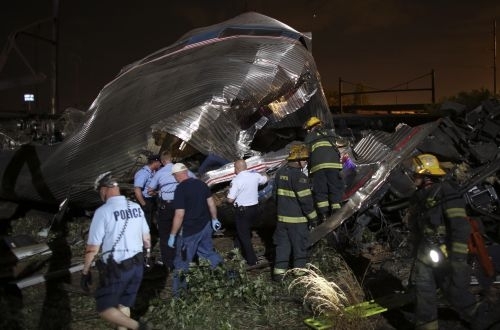 The derailment, which was caused by excessive speed on a curve, resulted in the death of eight people and the injury of 200.

The Amtrak driver, Mr Brandon Bostian, was described by the NTSB in its May 17 report as "qualified, experienced, and apparently alert." The NTSB says the Amtrak train had just passed a Septa commuter train with a shattered windscreen and Bostian was "very concerned" about the Septa driver, who had requested medical attention. That area in North Philadelphia on the Northeast Corridor (NEC) is well-known as a trouble spot where heavy objects are sometimes thrown at or dropped into the path of trains. Bostian, distracted, likely "lost track of where he was" and didn't realise he was seconds away from entering Frankford curve which has an 88.5km/h speed restriction at 170.5km/h.

Bostian, who suffered severe concussion, told investigators his memories of the crash are foggy. The NTSB's assessment is that Bostian "went, in a matter of seconds, from distraction to disaster." According to the NTSB, amnesia after a severe blow to the head is possible.

Frankford curve at the time was not equipped with an enforced speed code for eastbound trains, nor was Advanced Civil Speed Enforcement System (ACSES), Amtrak's version of Positive Train Control (PTC), activated there. Following the derailment, Amtrak installed speed codes on all non-equipped curves, and by the end of 2015, ACSES had been activated on the entire NEC.