TRAMS have returned to the streets of El Paso, Texas, after an a 44-year absence with the start of dynamic testing on the $US 97m El Paso Streetcar line. 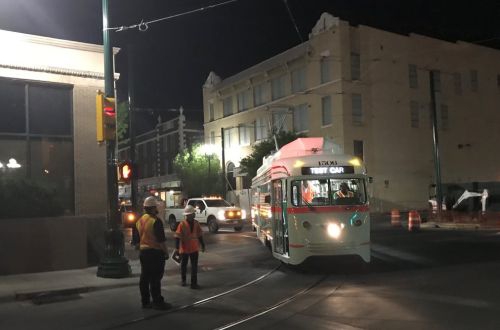 Following the closure of the original network in 1974, Camino Real Regional Mobility Authority (CRRMA) retained a number of PCC trams dating from the 1930s and kept them in open storage pending an eventual return to service.

Six of these vehicles are being restored and modernised by Brookville Equipment Corporation at its facility in Pennsylvania under a contract awarded by CRRMA in 2015. This work involves the repair and replacement of structural carbody components, new propulsion systems, rewiring, new interiors, and upgraded door systems. The vehicles have also been equipped with HVAC systems and passenger Wi-Fi.

All six vehicles are being repainted into historical liveries carried by the El Paso fleet between the 1950s and 1970s.

Due to open at the end of this year, the 7.7km line forms two loops, running north along Santon Street and south on Oregon Street, before running through the city centre on Kansas Street, Father Rahm Avenue and Santa Fe Street.

The 27-station line will be operated by local public transport operator Sun Metro.