SAN FRANCISCO Bay Area Rapid Transit (Bart) announced on November 16 that the first of 775 Fleet of the Future metro cars is nearing completion at Bombardier's Plattsburgh plant in New York state and will be dispatched by road to California next month. 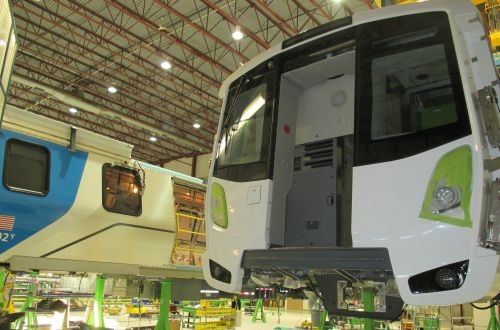 By the end of this year Bombardier is due to deliver 10 pre-series vehicles, which will initially be validated on Bart's test track at Hayward, California, before undergoing an 18-month programme of trials on the Bart network. The cars are expected to enter passenger service in December 2016.

Delivery of production cars is due to start in January 2017 adding 140 vehicles to the fleet by the end of the year. Bombardier will ramp up production in 2018, delivering 16 cars per month, adding 192 per year between 2019 and 2021. The final batch of 59 train cars will be delivered by September 2021.

Bart says it hopes to increase the order to 1081 vehicles, enabling it to replace the oldest trains in its fleet and increase seating capacity by 49%.