THE first two Siemens SC-44 Charger diesel passenger locomotives have arrived in Colorado for the start of testing at TTCI's Pueblo facility. 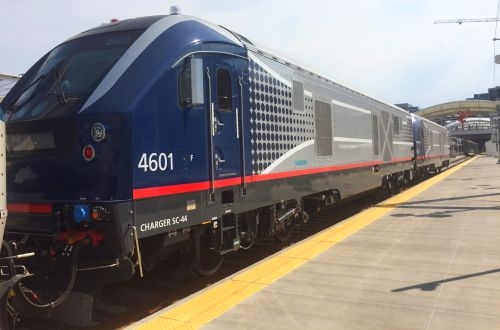 Illinois Department of Transportation (Idot) awarded Siemens a $US 228m contract in 2014 to supply 32 of the 200km/h diesel-electric locomotives for use on Amtrak services in the states of Illinois, California, Michigan, Missouri and Washington. The locomotives are being assembled at Siemens' plant in Sacramento, California and the first units are due to be accepted by Idot in December.

The first options for additional units were exercised in November 2015, when the states of California, Illinois and Maryland ordered a total of 34 locomotives.

In September 2014 All Aboard Florida ordered 10 Charger locomotives to operate its Brightline passenger service from Miami to Fort Lauderdale and Orlando, which is due to be launched next year. Assembly of these locomotives is now underway at Sacramento.

The four-axle ac traction Charger is the first locomotive to be equipped with Cummins' QSK 95 power unit. The 95-litre 16 cylinder engine is rated at 3.28MW and is equipped with Cummins' Modular Common Rail Fuel System (MCRS) with quad-turbocharging. The QSK95 is also equipped with Selective Catalytic Reduction (SCR) exhaust aftertreatment, enabling it to meet US Envirnomental Protection Agency (EPA) Tier 4 emissions standards.