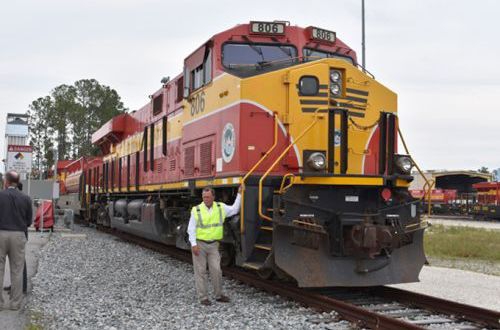 FECR is also the first railway to haul LNG as a commodity under a Federal Railroad Administration (FRA) waiver.

LNG has been tested as a locomotive fuel for 25 years in North America and is still under evaluation by several Class 1 railways including BNSF. The fuel has been adopted by FECR as an alternative to diesel for two reasons. Firstly, FECR’s line-haul locomotive fleet is captive, operating solely on the Jacksonville - Miami main line. Secondly, FECR has access to a ready source of LNG through Florida East Coast Industries’ LNG plant at Titusville.

The EPA Tier 3-compliant locomotives look identical to standard ES44ACs, but their GEVO prime-movers have been retrofitted by GE with its NextFuel low-pressure technology. According to the manufacturer, NextFuel gives railways the flexibility to run on both diesel fuel and LNG with up to 80% gas substitution or 100% diesel.

The gas substitution method retains diesel for compression ignition purposes. A 100% LNG engine would require a spark ignition, like a petrol engine.

The fuel tender was specially-developed by Chart Industries and consists of a cryogenic tank permanently mounted on a wagon, with the vehicle weighing in 67.9 tonnes when fully loaded.

The tender is designed to withstand a side impact from a lorry without damage and the vehicle is fully enclosed beneath the frame to eliminate the risk of a projectile piercing the tank from beneath in the event of a derailment. The design was extensively computer-modelled to simulate worse-case side impact and derailment scenarios.

The cryogenic tank comprises an inner stainless-steel tank within an outer carbon-steel tank, separated by a layer of thermal insulation, the tank is secured to the wagon and protected by a massive steel frame with collision posts.

A gasification system takes the LNG and transforms it into a gas for the fuel injection system. Safety features include valves that snap shut automatically if the LNG plumbing is damaged, preventing leakage.

Refilling an empty tender takes around 90 minutes and provides enough fuel for up to 1450km of heavy-haul service operating at a maximum speed of 97km/h. This is sufficient for an 1100km round trip between Jacksonville and Miami, including idling time and potential delays.