FORTH WORTH Transportation Authority signed a $US 106.7m contract with Stadler Rail for eight four-car articulated DMUs for the Tex Rail commuter line in a ceremony at the city's Intermodal Transportation Center (ITC) on June 9. 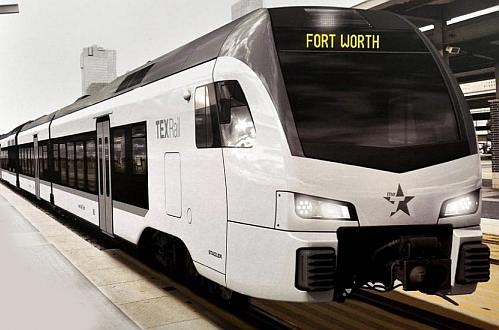 The contract, which includes the supply of components for 10 years, was signed by the authority's chairman Mr Scott Mahaffey, CEO Paul Ballard, and Stadler Rail CEO Mr Peter Spuhler. The deal includes an option for up to 24 additional trains and final assembly will take place in Texas with a site at nearby Lewisville being considered as a possible location for the facility.

The 43.5km 10-station line from Fort Worth city centre to Grapevine and Dallas Fort Worth (DFW) Airport Terminal B is due to open in late-2018 and is initially forecast to carry around 10,000 passengers per day, increasing to 14,500 by 2035.

On June 2 the US Federal Transit Administration gave Fort Worth Transportation Authority the go-ahead to take the $US 1bn project to the engineering phase, which included authorisation to order rolling stock.