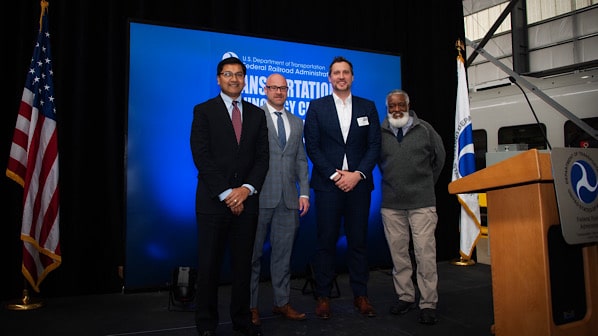 MORE than 200 people including leading officials from the Federal Railroad Administration (FRA), the state of Colorado, the local community, freight railways, industry suppliers and Ensco gathered at the Transportation Technology Centre (TTC) in Pueblo, Colorado, on October 25, to officially launched an “era of modernisation” at the site and to celebrate its 50th anniversary.

Ensco became responsible for operational procedures at TTC on October 1 under a contract awarded by the FRA in March 2021. Ensco takes over from Transportation Technology Center Inc (TTCI) (now rebranded as MxV Rail), which held the contract to operate the facility since 1982, and comes with a remit to expand the site’s research, testing and training activities to all modes of surface transport.

Speaking to IRJ, Ensco president, Mr Jeff Stevens, said he used the event to reiterate Ensco’s commitment to work with the FRA as a partner and “to ensure this centre leads the world in railway research, testing and training.”

“The work we are going to conduct here is going to help reduce tragic fatalities at rail crossings, reduce the carbon footprint of rail transport and ensure the safe introduction of trains into operation,” Stevens says. “The research and testing here will provide critical data to support FRA and their development of new safety standards. And through new and expanding training programmes, will help them develop their workforce of tomorrow.”

Attendees were also invited to ride a Stadler Flirt DMU, which is undergoing testing at the facility ahead of entering service with Dallas Area Rapid Transit (Dart).

Bose says that after contributing to dramatic transport improvements over the past 50 years, TTC’s future research and testing work will “help further transform the safety, reliability and sustainability of rail operations for generations of Americans.”

While preparations for the start of Ensco’s activities at TTC have been taking place for many months, Stevens says that it soon became apparent on receiving the keys on October 1 that a lot of work was required to prepare the site for both the opening event and for the start of its research and development activities.

He reports that his team has conducted an extensive clean-up of the site, including the main operations building where most of its staff work along with the passenger services building, one of the largest shops on at the facility. Measuring cars have also surveyed all of the track infrastructure.

“Right now we have 100 people coming through the gates on a daily basis to do work on the site and we hope that continues to grow, especially as we launch more training programmes over the next month,” Stevens says.

While around 80 staff at TTC are employed by Ensco, including people with many years of experience at TTC and new employees that it has recruited, it is not the only party responsible for work at TTC. A key element of Ensco’s business model is partnerships with other organisations. Among the surface transport research, training, technology and facilities organisations it has partnered with are: Ambipar Response, Atkins Global, Sharma and Associates, GTI Energy, Emcor Government Services, and Northern Plains Railroad. Research at the site is supported by the Center for Surface Transportation Testing and Academic Research (C-STTAR), a consortium of eight universities and academic research centres.

Stevens says Ambipar Response has already commenced construction of their new emergency response training centre at TTC, which will be in full operation by the end of the year. “That will serve rail, highway and industrial applications,” he says.

Among the upcoming developments at TTC are the addition of facilities for modes of transport not currently served such as pipelines and trucking, and emerging transport technologies such as hyperloop.

Looking ahead, Stevens says he expects future work at the site to include testing of high-speed passenger trains, alternative fuel rolling stock, structural integrity of infrastructure and new train control and communications technologies. He adds that work will take place to reduce the overall carbon footprint of the facility, including introducing solar energy and natural gas and using electric vehicles (EV). “We have started building our EV fleet and about half are electric at this time,” Stevens says.

One of the initial priorities is to establish a new federal training centre for use by FRA and the TSA. Another is the start of testing alternative fuel vehicles, including hydrogen and LNG, which Steven says will be supported by new infrastructure to enable testing, including fuel storage facilities.

Stevens reports that it took around two weeks for his teams to prepare the site for the launch event. And while a good opportunity to reflect, it was a chance to look ahead to a new era at one of the world’s premier railway research facilities. Arguably the real hard work is only now getting started.

“It was an awesome experience for me just to gaze out over the facility,” Stevens says. “You had multiple rolling stock test going on, there were trains and locomotives moving on the various test loops on site. All of that wouldn’t have been possible without this great team we have put together.”