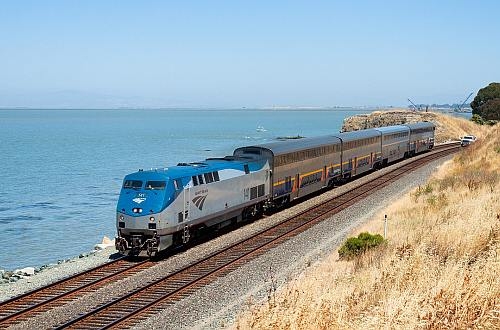 The new locomotives will be operated on routes in Illinois, California, Michigan, Missouri and Washington state with the federal government allocating $US 808m to build the locomotives together with 130 double-deck coaches which are currently under construction at Nippon-Sharyo's plant in Rochelle, Illinois.

FRA officials say the new units will meet EPA Tier 4 emissions standards not currently achieved by existing passenger locomotives operated in these states, and will be procured through a competitive tender process, the date for which has yet to be confirmed.

California requested that the units are capable of operating at 200km/h as it plans to operate at these speeds on certain sections of its routes. However, Illinois deemed that upgrading infrastructure for 200km/h operation on the Chicago - St Louis corridor was not feasible. Around 75% of the upgraded route in Illinois will have a maximum speed of 177km/h when the project is completed in 2017 with a 22km section already operating at these speeds. On the Chicago - Detroit corridor, trains began operating at 177km/h on a 127km section in February 2012 with full 177km/h operation on the entire route due to begin in 2014 or 2015. Idot confirmed that 21 of the locomotives and 88 of the coaches will operate on routes in the Midwest of the United States

Funding for the new locomotives and rolling stock was originally allocated in the American Reinvestment and Recovery Act of 2009 and was earmarked for passenger rail infrastructure improvement projects in Wisconsin and Ohio and a new dedicated high-speed line in Florida. However, the funds were subsequently returned to the FRA by the states' respective governors and in addition to the rolling stock replacement programme have since been allocated to projects including the California high-speed project, and the Chicago - Detroit, and Chicago - St Louis improvement projects.