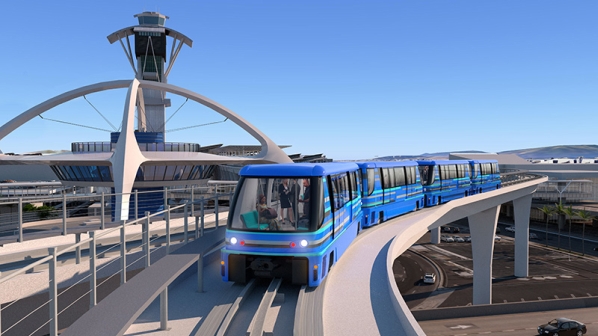 THE Los Angeles County Metropolitan Transportation Authority (LA Metro) has named Tutor Perini as the lowest bidder for a $US 478m contract to build a new transport interchange as part of the LAX Airport Metro Connector project.

The contract covers the construction of a new multimodal interchange at the junction of Aviation Boulevard and 96th Street, which will connect the new 3.6km LAX Automated People Mover with the existing 32km Line C (Redondo Beach - Norwalk) and the under construction 13.7km Line K (Crenshaw - LAX) light rail lines, as well as several bus routes.

A shortlist of six bidders was published for the contract. The other five are:

Work on the six-station elevated LAX Automated People Mover began in March 2019, with the line currently anticipated to be operational from 2023. The Fluor-led Linxs joint venture is delivering the project under a $US 2.7bn design, build, finance, operate contract awarded by Los Angeles World Airports (LAWA) in February 2018.

Work on Line K began in January 2014 and is being carried out by a consortium of Walsh, Shea, HNTB, Comstock and ARUP (The Walsh/Shea Corridor Constructors). The line is expected to open later this year.