THE governor of Massachusetts Mr Charlie Baker and Mrs Stephanie Pollack, secretary of the state’s Department of Transportation (MassDOT) visited the Massachusetts Bay Transportation Authority (MBTA) depot at Wellington on March 21 to view a mock up of the new-generation metro car for Boston’s Orange Line. 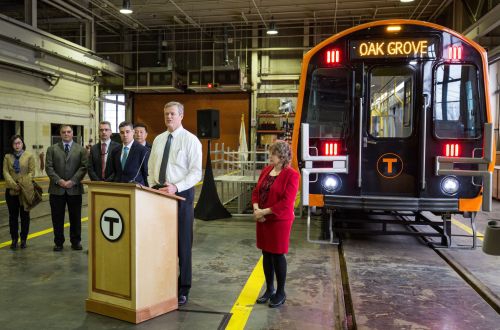 In October 2014 MassDOT awarded CNR Changchun Railway Vehicles (now part of CRRC Corporation) a $US 566.6m contract to supply 152 vehicles to replace the PA3 cars built by Hawker Siddeley Canada in 1979-81. MBTA also ordered 132 vehicles for the Red Line, an order which was subsequently increased to 252 cars.

The trains will be equipped with LED lighting, air-conditioning, and advanced passenger information systems.

Assembly will be carried out by CRRC MA at its new 13,900m2 plant in Springfield, Massachusetts, where manufacturing is due to begin in April 2018. The Orange Line cars will enter service between 2019 and 2023.

For detailed data on metro train orders around the world subscribe to IRJ Pro.