TORONTO and Hamilton transit authority Metrolinx has awarded Bombardier a contract to supply an additional 65 double-deck coaches for Go Transit commuter services, with options for a further 75 vehicles. 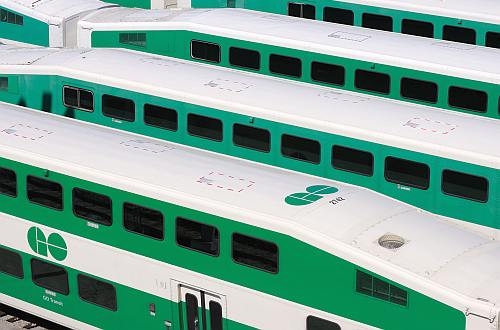 The coaches will be assembled at Bombardier's Thunder Bay plant in Ontario and the initial batch of 65 vehicles will be delivered between June 2016 and July 2017, taking Go Transit's double-deck fleet to 743 vehicles. The total value of the contract will be $C481m ($US 430m) if all options are exercised.

"More and more people are using Go Transit and that trend has grown consistently over the last few years," says Go Transit president Mr Greg Percy. "These new coaches will allow us to continue meeting our growth needs and support our plans for eventual two-way, all-day service on all of our rail lines."

Metrolinx is currently expanding commuter rail capacity on the Kitchener Line with the $C 1.2bn Georgetown South project, which will allow commuter rail services to be increased from 19 to 29 trains per day from 2015, while also providing capacity for UP Express services to Pearson International Airport. The project, which is part of Metrolinx' Big Move investment programme, involves the construction of two additional tracks in the northern half of the Go Georgetown South Corridor, and one additional track to the south.