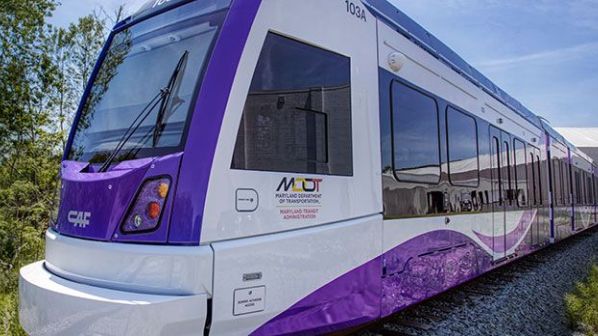 THE long-delayed Maryland Purple Line is slowly getting back on track following the approval of a new design-build team, Maryland Transit Solutions, under a new $US 3.4bn contract. The total project is now estimated to cost $US 9.284bn.

The new contract was announced on January 26 by the Maryland Department of Transportation (MDOT), which said full-scale construction on the 26km, 21-station light rail project that broke ground in 2017 will begin this spring. The Purple Line, which has been plagued with litigation and was originally expected to open in March, is now expected to start carrying passengers between Bethesda and New Carrollton in autumn 2026.

The state of Maryland took over hundreds of contracts relating to the project in October 2020 after Fluor, the managing partner of the Purple Line Transit Constructors (PLTC) design-build team, announced it was walking away from the project. Project manager, Mr Scott Risley, at the time citied delays caused by a lawsuit, problems obtaining land for the right-of-way, last-minute changes in design requirements and difficulties in obtaining state environmental approvals as reasons for exiting the public-private partnership (PPP) agreement it had with the MDOT, MDOT Maryland Transit Administration (MDOT MTA) and Purple Line Transit Partners (PLTD).

Under the new contract agreed by MDOT, Fluor will be replaced by Maryland Transit Solutions, comprising Dragados USA and OHL USA, while equity partners Meridiam and Star America will remain involved in the project. Commercial and financial close of the new contract is anticipated in the coming weeks.

The move follows a $US 250m settlement reached in November 2020 between MDOT and the three companies connected with PLTP.

While Maryland Transit Solutions will assume most of these contracts, the Maryland Board of Public Works on January 26 also approved five new MDOT MTA contracts totalling $US 15.4m to allow completion of unfinished work, including utility relocation, concrete and other construction. Additionally, the board approved a four-year, $US 15m contract modification for the general engineering consultant’s continued technical oversight of design and construction.

The price tag for the now modified PPP agreement is $US 9.284bn, up 66% from the 2016 estimate of $US 5.59bn. It covers payment to Maryland Transit Solutions for design-build work at a 70% higher cost, MDOT reported, due to the “post-pandemic market,” with material shortages, smaller labour force, and increases in the insurance market, among other factors; to Purple Line Transit Operators for 30 years of line operation and maintenance; to PLTP for management oversight of all elements of the Purple Line for the life of the project; and to MDOT for repayment of debt and equity.

“PLTP will finance the additional project cost through a combination of debt and equity that will be repaid through availability payments made by the state,” MDOT says. “PLTP also has agreed to reduce its rate of return - essentially what it gets back on the project - by 20%. The PPP agreement includes operational and performance targets that must be met by the partners in order to receive the full availability payments.”

MDOT says the PPP agreement modification also “shortens, clarifies and streamlines the process for any dispute resolution between parties,”. “Separate and distinct from the dispute resolution process, the PPP agreement also was modified to remove the right to unconditionally terminate the PPP agreement for extended delay, which was utilised by the previous design-build contractor as a basis to leave the project. The right to conditionally terminate for extended delay also has been narrowed. The contractor can conditionally elect to terminate in the case of an extended ‘force majeure’ event that is out of the control of either party, such as war, an act of terrorism, fire and flood, but that is not a unilateral right and the owner can elect to continue in that event.”

CAF USA continues work on the 28 LRVs that will operate on the Purple Line. According to MDOT, eight are complete and available for shipment from CAF’s Elmira, New York, facility; eight are undergoing static testing; and another eight are being assembled. In autumn 2023, vehicles are due to start arriving at the Glenridge Operations & Maintenance Facility in Prince George’s County, and in summer 2024, the test track is expected to be complete for local testing and operator training.

“In winter 2025, construction is scheduled to have progressed enough to allow system-wide testing, and commissioning activities will be ongoing,” MDOT says.