NEW YORK celebrated the opening of the first addition to its subway network for 26 years on September 13 with the inauguration of the 2.4km western extension of Line 7 (Flushing Line) from Times Square to 34th Street-Hudson Yards. 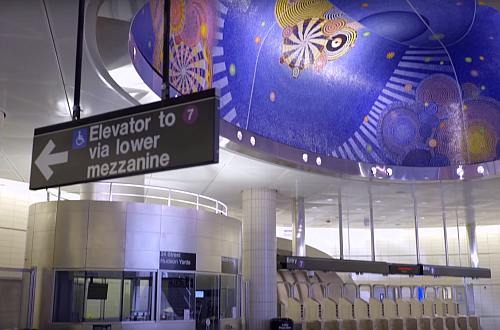 The extension is the first addition to the network since the opening of Lexington Avenue-63rd Street, Roosevelt Island, and 21st Street-Queensbridge stations in 1989.
Construction began on the $US 2.1bn project in December 2007 and the tunnels are the first on the MTA subway network to be excavated using TBMs. The new terminus at 34th Street-Hudson Yards also features the longest column-free platform on the system.

"This station is the centerpiece of an ambitious plan to make the far west side of Manhattan a top-tier destination for residents and visitors alike while meeting the daily needs of millions of subway riders, and one that is poised to meet future needs," says New York state governor Mr Andrew Cuomo. "It is a clear example of how the City and State can work together to support a transit network that drives our regional economy."

Ferrara added: "This beautiful new station is just the beginning of the enhanced service the hundreds of thousands of customers on Line 7 will see in the future. When CBTC is fully installed in 2017, we'll be able to increase service on Line 7 to further meet the growing ridership demand on the far West Side as well as in growing neighbourhoods in Queens."

34th Street-Hudson Yards station is the first on the network to comply fully with the Americans with Disabilities (ADA) act, with two inclined elevators between the upper and lower mezzanines. Each elevator can accommodate five wheelchairs or 15 standing passengers.

The centerpiece of the station is a "Functional-Vibrations", a 259m2 ceiling mosaic designed by US artist Mrs Xenobia Bailey.

Services on the extension will operate at 2.5-minute headways during peak periods with a journey time of four minutes to Times Square and seven minutes to Grand Central-42nd Street.