DESIGN studies for the next-generation of New York subway trains and refurbished stations were revealed as part of the $US 27bn Metropolitan Transportation Authority (MTA) five-year capital programme, which was unveiled by New York state governor Mr Andrew Cuomo at Brooklyn Transit Museum on July 18. 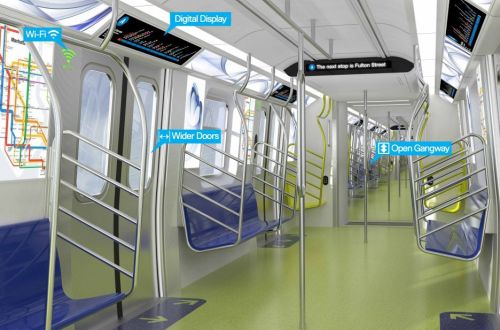 Under the programme, MTA is planning to order 1025 R-211 metro cars, including 750 with full-width gangways, a first for the New York subway network. Passenger door widths on the new trains will be increased to 147cm, compared with 127cm on the current fleet, to improve passenger flow. Simulations have confirmed that this could reduce dwell times by up to 32% during peak periods.

The new subway train design has been developed by Antenna Design with CH2M acting as engineering consultant on the project.

In addition to new trains, the capital programme calls for the comprehensive modernisation of 31 stations across the five boroughs that make up the New York Metropolitan Area.

Enhancements will include new lighting, improved signage, new real-time passenger information systems, improved mobile phone reception, Wi-Fi, and new artworks. MTA says the renovations will consider the architectural legacy of each station and be sympathetic to the historical nature of many structures.

MTA will issue requests for proposals (RFPs) later this week for the first three stations - Prospect Avenue, 53rd Street, and Bay Ridge Avenue, which are all located in Brooklyn. RFPs for the remaining 28 stations will be issued over the next year and the first contract will be awarded in the autumn. All works will be tendered on a design-build basis and station closures will be limited to a maximum of six months.

Improvements will also be carried out at a further 170 stations across the subway network.

Design studies for the station modernisation programme were led by Grimshaw Architects and Arup.