SOME New York City-area residents resumed their everyday commute on Monday with varying degrees of success. But New Jersey residents may be deprived of adequate rail transit alternatives for far longer than their counterparts in New York State and Connecticut, in large part due to damaged rolling stock and locomotives. 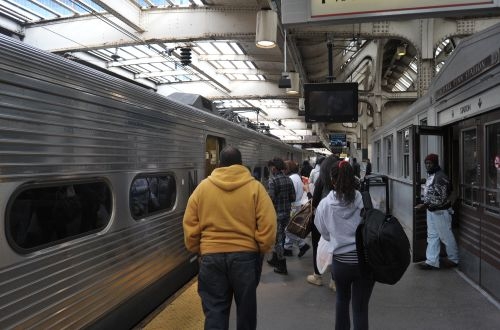 Bloomberg Radio reports that 23% of New Jersey Transit's (NJT) rolling stock, and 34% of its locomotives, have been damaged or rendered unusable by Hurricane Sandy. Quantitative repair estimates, as well as cost, are unavailable.

The operator, which only had a single light-rail line in operation for most of last week and started Northeast Corridor service to Penn Station on Friday, began running trains on three rail lines on Sunday morning.

The North Jersey Coast Line has resumed limited service to New York Penn Station, operating between Woodbridge and New York; the Raritan Valley Line service is offering a limited service between Raritan and Newark Penn Station, as is the Main/Port Jervis Line. However, trains originating and terminating in Secaucus and the Atlantic City Line have resumed their normal service between Atlantic City and Philadelphia.

Other railways in the region are also piecing their operations back together.

Amtrak offered a reduced Acela Express and Northeast Regional service on the Northeast Corridor from Boston to New York City and Washington, DC, yesterday. The operator is also continuing to restore the Empire Service between New York City and Albany-Rensselaer by offering a modified schedule.

By Sunday, New York Metropolitan Transportation Authority offered limited and modified service on all subway lines with the exception of the G line. MTA said that on Monday morning the Long Island Rail Road and Metro-North Railroad offered as close to regularly scheduled service as possible. In addition, limited service was restored to the Staten Island Railway with crews working around the clock to restore other line segments.

MTA Metro-North Railroad resumed full service on all three of its main lines on Saturday. Limited service resumed on Sunday on the Port Jervis Line following a week-long suspension. Metro-North restarted services on its branch lines east of the Hudson River on Monday morning. The New Canaan Branch in Connecticut, which still has severe tree damage to overhead catenary, is being served by buses connecting to train services.

MTA Long Island Rail Road is operating a modified schedule on all branches except the Long Beach branch. Trains on the Ronkonkoma Branch are not operating east of Ronkonkoma and trains on the Montauk Branch will not operate east of Speonk. With two of the East River tunnels operated by Amtrak into Penn Station still out of service due to flooding, a reduced service is in place.