INVESTIGATIONS are continuing into the cause of a derailment of an Amtrak train on the North East Corridor (NEC) in Philadelphia on the evening of May 12, which left seven people dead and over 200 injured. 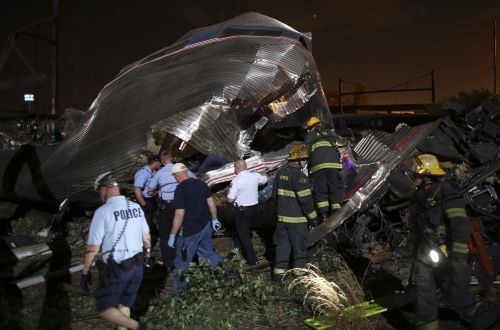 The NEC remains closed in Philadelphia as investigators sift through the remains of Train 188, which was travelling from Washington DC's Union Station to New York's Penn Station and was carrying 238 passengers and five crew members when the accident occurred at around 21.38EST. According to reports, the train was travelling at 170km/h on the section which has a speed limit of 81km/h when the driver applied the emergency brake.

The entire train consisting of an ACS-64 electric locomotive and seven Amfleet coaches derailed, with initial reports indicating that the passenger coaches separated from the locomotive. Several coaches uncoupled, coming to rest perpendicular to the other coaches. The National Safety Transportation Board said it was deploying an investigative team, which would arrive at the site on Wednesday morning, while the Federal Railroad Administration said it was dispatching at least eight investigators to the accident.

Eyewitness reports from the scene describe the train suddenly shaking as though it was grinding to a halt and then leave the tracks. Many passengers climbed through windows of the coaches that were "tipped on their side" to escape the train and were subsequently urged to run away from the train in case another arrived. More than 140 people were taken to hospital, with six people said to be critically injured and some passengers yet to be accounted for.

"There were people standing around, people with bloody faces," said passenger Mr Daniel Wertin. "There were people, chairs, tables mangled about it in the compartment... power cables all buckled down as you stepped off the train."

The derailment occurred at the Frankford Junction interlocking, which has a sharp curve, and is where the four-track NEC connects with the New Jersey Transit’s double-track Atlantic City Line. It is also close to the scene of the 1943 derailment of the Congressional Limited, which killed 79 people and is one of the United States' most deadly train accidents.

Amtrak Northeast Corridor service between Philadelphia and New York is suspended until further notice, as is Septa commuter service on the Chestnut Hill West and Trenton Regional lines. "There's no circumstances under which there would be any Amtrak service this week through Philadelphia," said Philadelphia mayor Mr Michael Nutter, who was visiting the scene of the accident.