THE mayor of Ottawa Mr Jim Watson officially relaunched the city's O-Train commuter rail line as the Trillium Line on March 2, marking the completion of a $C 60.3m ($US 48.1m) project to upgrade the 8km diesel-operated line from Bayview to Greenboro. 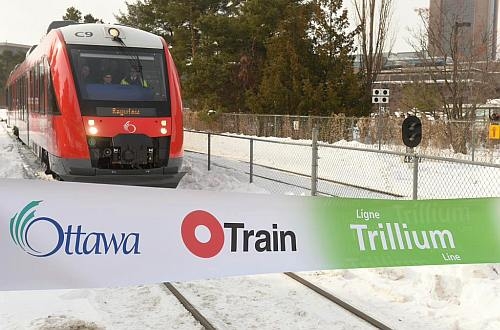 To increase capacity the line has been resignalled and a new centralised traffic control centre commissioned. Passing loops have been constructed near Brookfield and Gladstone stations to enable the service to operate at shorter headways.

The fleet of Bombardier Talent DMUs delivered for the opening of the line in 2001 has been augmented with six two-car Coradia Lint DMUs, which were ordered from Alstom in 2011 at a cost of $C 34m. Each new train accommodates up to 260 passengers.

Trains now operate in multiple to provide additional capacity and services run every 10-12 minutes between Monday and Friday with a 10-15-minute interval service on Sundays. Frequencies will gradually be stepped up to 8-10 minutes as ridership increases.

Passenger numbers on the Trillium Line are expected to rise with the opening of the light rail Confederation Line in 2018. The two lines will meet at Bayview.