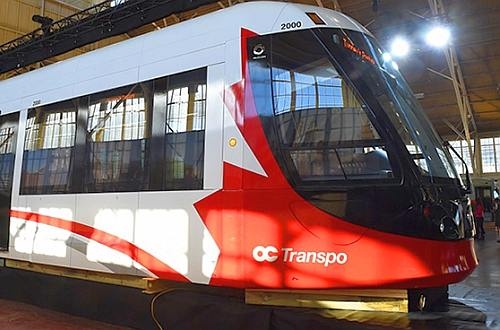 The mock-up will be on public display in the Aberdeen Pavillion at Lansdowne Park until the end of March.

Alstom is a member of Rideau Transit Group, the consortium led by ACS Infrastructure Canada which was awarded a $C 2.1bn ($US 1.7bn) contract in 2013 to design, build, finance, and maintain the east-west line from Blair to Tunney's Pasture. Alstom will supply 34 LRVs for the 12.5km line and will be responsible for maintaining the fleet for the duration of the 30-year concession.

The four-section 50m-long vehicles will be design to operate in multiple and each LRV will accommodate up to 300 passengers. Final assembly will be carried out at Alstom's plant in the city.

Ottawa is the first customer for the Citadis Spirit, which has been developed specifically for the North American market.

The Confederation Line is due to open in 2018 and services will operate at minimum headways of 1min 45sec with an end-to-end journey time of 24 minutes. This will provide a capacity of 10,700 passengers per hour per direction, which could increase to 18,000 passengers per hour per direction by 2031 if an option for 21 additional LRVs is exercised.