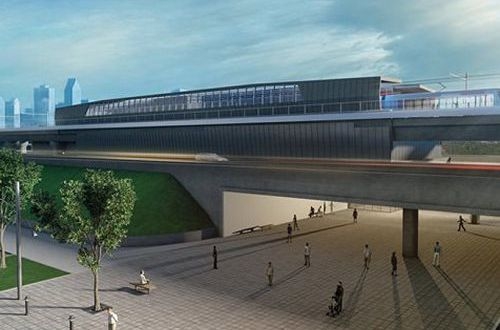 The Metropolitan Electric Network (REM) will serve 24 stations and operate 20 hours a day, with departures every 3-12 minutes depending on the route and time of day.

Caisse de Dépôt et Placement du Québec (CDPQ) will provide $C 3bn ($US 2.4bn) of the $C 5.5bn required for the project, with the balance coming from the Quebec and Canadian governments as subordinate equity investors.

Because of its responsibilities to protect old-age pension payouts, the deal will guarantee the pension fund first call on any profits, with the two levels of government claiming their share only above an agreed-upon threshold. However, CDBQ will not ask government to guarantee its investment and will assume ridership and revenue risk.

This means that, the pension fund, which last November acquired 30% of Bombardier's global rail business, becomes a railway operator.

The REM will involve reconstruction and conversion of the existing Metropolitan Transit Agency (AMT) Deux-Montagnes line, which tunnels under Mount Royal to the city's Central Station, as well as new infrastrucutre along the existing Highway 40 route from the city's western tip to a connection with the Deux-Montagnes.

In addition, the REM will include a spur to Pierre Elliott Trudeau International Airport and will extend new trackage from the city centre to the suburbs along the St Lawrence River south shore via a new Champlain Bridge, which is scheduled to open in 2018.
REM will be the third-longest driverless rail system in the world, after Dubai and Vancouver, and will employ around 1000 staff.

The initial fleet will consist of 200 EMU cars, each capable of accommodating up to 150 passengers. Peak trains will be formed of four cars, with two-car formations at other times.

CDPQ says construction should start in spring 2017, which would enable the entire network to open in 2020. Procurement and environment assessment hearings will begin this summer.

Montreal's mayor Mr Denis Coderre has endorsed the project, assuring that rights-of-way and infrastructure currently belonging to ATM will pass to the new REM. The project fits with Montreal's declared ambition to convert its bus fleet to electricity and provide a network of vehicle charging stations for public use.

The ambitious timeline depends on agreement by the federal and provincial governments to join in CDPQ's scheme for a "public-public" partnership in which future seniors are the primary equity holders. CDPQ says the business model is "a virtuous circle in which profits from passenger fares will feed public pension payouts. Every time passengers use their new transit system, they will be helping to secure their future retirement."