CONSTRUCTION of the 2.6km Phase II Northwest light rail extension in Phoenix, Arizona, has begun with work scheduled for completion in 2023. 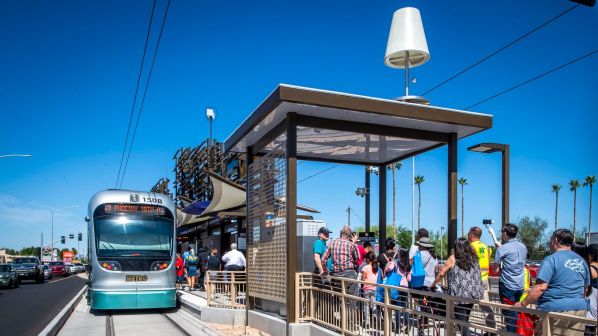 Work on the $US 401.3m extension, which is part of the city’s 45km Valley Metro network linking Phoenix, Tempe and Mesa, began with the relocation of electrical power lines on the north side of Dunlap Avenue, west of the current terminus at 19th Avenue/Dunlap. Construction is being carried out by a consortium of Omaha-based Kiewit and local firm McCarthy Building Companies.

The new section, which is planned to open in early 2024, will extend services from 19th Avenue/Dunlap across the I-17 Interstate highway to a new terminus near the old Metrocenter Mall. It follows the 2km Phase 1 extension between Montebello and Dunlap Avenue, which opened in March 2016.

The extension will have three new stations, including an interchange at the Metrocenter with five bus routes. In addition, the project will include the planting of 200 trees and the installation of seven public artworks.

The extension is expected to offer redevelopment opportunities and economic stimulus for the city’s northwest, following the closure of the Metrocenter Mall in June.

“Residents and businesses in the Metrocenter area are ready and excited for construction on the Northwest Extension Phase II to begin as the area is primed for quality development driven in part by light rail,” says Ms Thelda Williams, a member of Phoenix City Council and chair of the transportation, infrastructure and innovation subcommittee.

The extension will be part funded by FTA grants worth $US 198.3m, as well as $US 173.07m in local funding from the City of Phoenix and $US 30m from Maricopa County.

The news follows the project’s approval by Valley Metro Rail (VMR) on July 23.