Rail services in New York unlikely to resume for a week

HURRICANE Sandy, the worst storm of its type to hit the New York-New Jersey metropolitan area in generations, has had a devastating impact on the rail network. 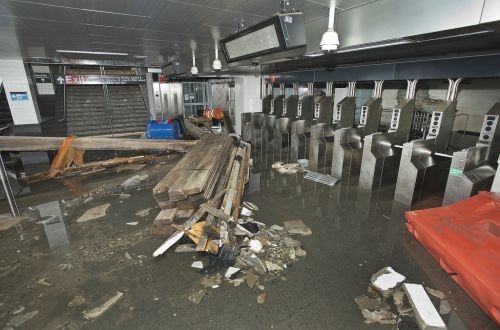 Millions of people who depend on trains every day have been left without service, and this is likely to continue for at least a week on most lines as crews work feverishly to repair billions of dollars in damage.

The New York subway has sustained the worst damage it has ever experienced in its 108-year history. Services remain suspended on all lines, as cleanup and water remediation efforts continue, especially in the tunnels linking Brooklyn and Manhattan that were flooded during the storm.

Metro-North lost electric power from 59th Street to Croton-Harmon on the Hudson Line and east to New Haven on the New Haven Line.LIRR sustained damage in its West Side Yard in Manhattan and suffered flooding in two of the four East River tunnels it shares with Amtrak and New Jersey Transit (NJT). LIRR crews have removed over 140 trees with many more yet to be cleared away.

"It is still too early to say how long it will take to restore the system to full service," says the Metropolitan Transportation Authority (MTA), which is responsible for the New York subway, LIRR and Metro-North. "This will be an exhaustive, time-consuming process with one goal: to restore safe and efficient service to 8.5 million daily MTA customers. It must be noted, however, that this process could have taken much longer had we not taken the pre-emptive measure of suspending all service to safeguard our equipment and prepare facilities to the best of our ability."

The situation is somewhat grimmer on NJT. The entire regional/commuter rail and LRT service will remain suspended until further notice and there is currently no estimated time for service resumption due to widespread damage to critical infrastructure. NJT's rail operations centre is engulfed in water, which has damaged backup power supply systems, the emergency generator, and the computer system that controls train movements and power supply to catenary. There are numerous fallen trees which have damaged catenary and signalling cables, and there are track washouts across the network.

Services on the Port Authority of New York and New Jersey's Path metro, which links Newark, Hoboken and Manhattan, are expected to be out of service for between a week to 10 days due to extensive flooding in its two sets of Hudson River tunnels, Hoboken Terminal, and at other locations.

Most of Amtrak's hurricane damage occurred on the Northeast Corridor east of Newark. Amtrak says the amount of water intrusion into the tunnels serving New York Penn station is unprecedented and it does not know yet when train services will resume.