CALIFORNIA Department of Transportation (Caltrans) has released a research report that details the impact freight and passenger rail operations have on the Californian economy. 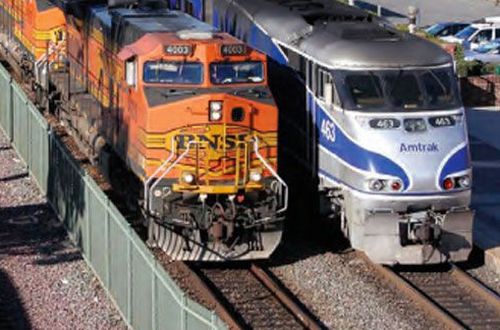 The report, Rail and the California Economy, is being released as an early research product supporting the 2018 California State Rail Plan and provides an overview of opportunities for rail to address the state’s needs and challenges in the future.

“Rail is a fundamental component of our transportation system that plays a strategic role in meeting California’s transportation needs,” says Mr Malcolm Dougherty, director, Caltrans. “California’s population is projected to grow by 21 million by 2050 so efficient movement of freight and people, while assuring safety and meeting air-quality goals, will continue to be our focus as we move forward with our plan.”

The research report presents case studies and analysis of the effect of freight and passenger rail services on land use, highway congestion, and the movement of different commodities.

The report states that 18% of the more than $US 400bn of total US imports moved through California in 2015, and that without rail service to and from the ports of Los Angeles and Long Beach, container flows through these ports would be reduced by 39%, while port truck traffic would increase by 44%.

The report explains that inter-city services, such as Los Angeles - San Diego, have a positive economic effect as they serve as a catalyst for economic development. Additionally, commuter rail, such as the San Francisco - San Jose Caltrain service, is noted for its positive impact. The report estimates that Caltrain riders save more than 200 tonnes of fuel emissions every day, representing 50,000 tonnes of CO2 annually, and equivalent to removing more than 10,000 vehicles from the road network.

While the report highlights the benefits of developing an efficient and effective rail system it also presents the challenges, such as shared track use, coordinated ticketing, inter-county coordination of funding, maintenance issues and more consistent bus connections. The report supports the California Transportation Plan 2040 and the 2018 State Rail Plan and the idea of rail as a fundamental strategy for ensuring California’s economic competitiveness, preserving and enhancing the environment and improving the quality of life for residents.