A Siemens SC-44 Charger locomotive has arrived in the US state of Washington for certification testing on Amtrak’s Cascades Corridor, which links Eugene with Portland, Seattle and Vancouver. 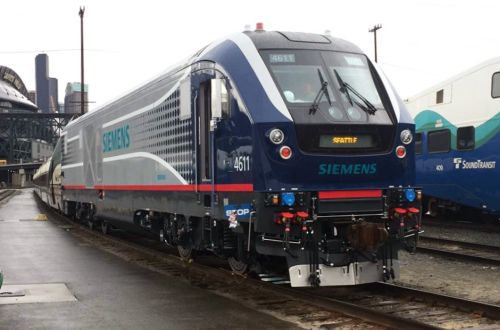 Illinois Department of Transportation awarded Siemens a $US 228m contract in 2014 to supply 32 of the 200km/h diesel-electric locomotives for use on Amtrak services in the states of Illinois, California, Michigan, Missouri and Washington. Washington State Department of Transportation (WSDOT) has ordered eight locomotives as part of its $US 800m federally-funded Cascades High-Speed Rail Program.

The locomotive being used for testing is destined for Illinois, and the first SC-44 for Washington is due to arrive in the Pacific Northwest in early April. WSDOT says these locomotives will receive a “Cascades inspired” livery.

The delivery of new traction and other improvements will enable WSDOT to introduce two additional daily Cascades services between Seattle and Portland in the autumn.

Production of the SC-44s is being carried out at Siemens’ plant in Sacramento, California.

The four-axle ac traction Charger is the first locomotive to be equipped with Cummins' QSK 95 power unit. The 95-litre 16 cylinder engine is rated at 3.28MW and is equipped with Cummins' Modular Common Rail Fuel System (MCRS) with quad-turbocharging. The QSK95 is also equipped with Selective Catalytic Reduction (SCR) exhaust aftertreatment, enabling it to meet US Environmental Protection Agency (EPA) Tier 4 emissions standards.