SIEMENS announced on December 14 that the first of five trains for All Aboard Florida’s Brightline service has left its factory in Sacramento, California, to make the 4912km journey to Florida. 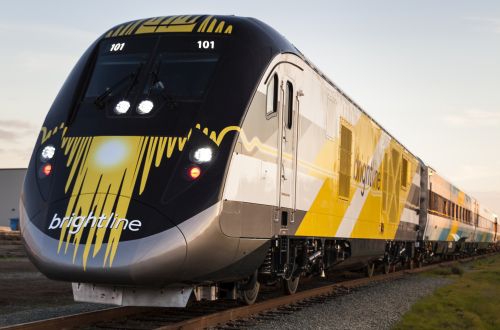 The trainset is around 149m long and formed of two Charger diesel-electric locomotives and four coaches in Brightline blue.

Construction of the first bodyshell began in July 2015, and Brightline is expecting to receive the other four trainsets by the end of March 2017 which will be coloured pink, red, orange and green.

“Having our first Brightline trainset completed and on its way to Florida is a major accomplishment and brings us one step closer to the introduction of our innovative new train service,” says Mr Michael Reininger, president of Brightline. “Once in Florida, our operations team will begin the required testing as we ready to launch Brightline between Miami, Fort Lauderdale and West Palm Beach next summer.”

“Building the first full train for Brightline is an extremely exciting milestone both for future riders in Florida and also for the many professionals who worked hard at our Sacramento manufacturing hub,” says Mr Michael Cahill, president of Siemens Rolling Stock.