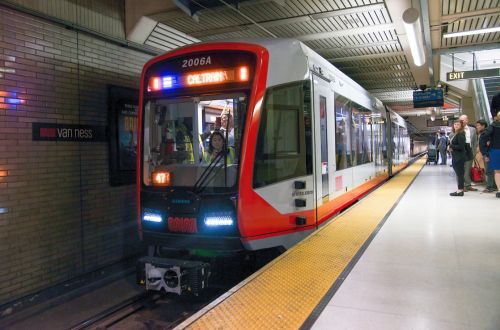 In September 2014 the San Francisco Board of Supervisors approved a 15-year contract with Siemens for the procurement of up to 260 new S200 SF LRVs, which will expand the LRV fleet by more than 70%.

The $US 648m base order comprises 151 vehicles to replace the Breda LRV2 and LRV3 trams, which entered service from 1996 onwards, together with 24 vehicles to expand the fleet ahead of the opening of the Central Subway. SFMTA subsequently exercised a $US 210m option for a further 40 vehicles, leaving one remaining option for 45 LRVs.

The vehicles - dubbed LRV4 by SFMTA - are being assembled at Siemens’ plant in Sacramento, California.

SFMTA says the introduction of the LRV4s is well ahead of schedule - the initial deployment plan specified that 24 vehicles would be in service by the end of 2018, but the agency now expects 68 vehicles to be introduced over the next year.

Further details of the fleet, and plans for the future development of San Francisco’s tram network, can be found here.