CLEARANCE testing for the 10.6km second phase of Los Angeles Expo Metro Line Construction Authority's Expo Line light rail project began April 6, when an LRV operating under its own power ran west from Culver City and across the new bridge over Venice Boulevard. 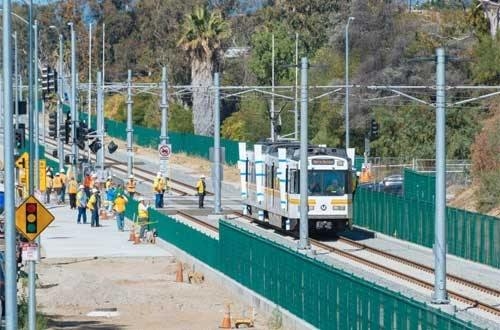 The second phase of the Expo Line from the current terminus at Culver City to Santa Monica is expected to open next spring, providing a direct link between 7th/Metro Center in Los Angeles city centre and central Santa Monica with a journey time of 46 minutes.

The line has seven stations, three of them with park-and-ride facilities, and is expected to carry 64,000 passengers per day by 2030.

The $US 1.5bn project is being funded by Measure R, a half-cent sales tax increase approved by Los Angeles County voters in 2008. When construction is complete later this year, the authority will hand over the project to Los Angeles County Metropolitan Transportation Authority (LACMTA), which will operate the line.