THE first light rail vehicle ran on the Los Angeles Gold Line Foothill extension on December 9, kicking off the testing phase on the 17.7km link between Pasadena and Azusa. 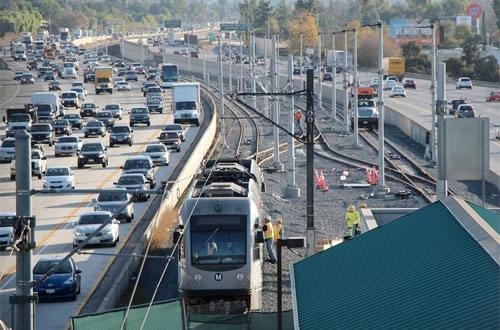 The AnsaldoBreda P2250 LRV was hauled by a road-rail vehicle over an 8km stretch of the line between East Pasadena and Monrovia to check clearances. Gauging runs will continue over the next two weeks, with tests focussing on catenary, switches and crossings, and the wheel/rail interface. During this phase the LRV will operate under its own power where the electrification has been energised.

Testing will continue until September 2015, when the six-station extension will be handed over to Los Angeles County Metropolitan Transportation Authority (LACMTA) for commissioning.

A further five-station extension from Azusa to Montclair is planned.