FORT Worth Trinity Metro celebrated a milestone for its TexRail commuter rail project on May 22 when the line’s train maintenance depot was inaugurated in the presence of the city’s mayor, Mrs Betsy Price, and Federal Transit Administration regional administrator, Mr Robert Patrick. 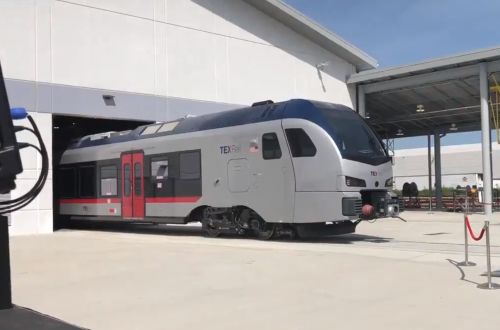 The 5000m2 Equipment Maintenance Facility (EMF) has been constructed on an 11-hectare site at East Long Avenue in the north of the city.

The depot, which is equipped with three maintenance pits (two indoor and one outdoor) and a train washing plant, will maintain and stable TexRail’s fleet of eight four-car Stadler Flirt DMUs. Two trains have already been delivered and are undergoing tests while a third train is due to arrive later this month. Stadler’s Salt Lake City plant will complete assembly of the five remaining trains by the end of the year.

In addition to rolling stock maintenance facilities, the EMF also houses a new operational control centre for both TexRail and Trinity Rail Express.

Due to open at the end of this year, the 43.5km line will connect Fort Worth city centre with Grapevine and Dallas Fort Worth (DFW) Airport Terminal B, serving 10 stations.