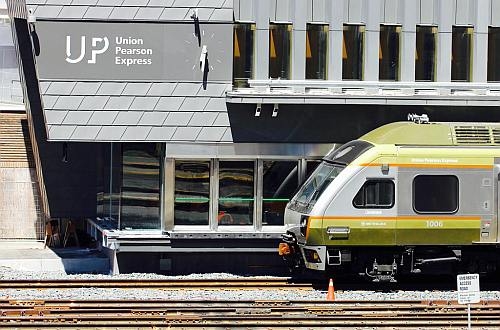 From Toronto Union station, UP Express trains run along Go Transit's Kitchener Line for 22km, calling at Bloor and Weston stations before diverging onto a new 3km elevated branch, which follows the route of Highway 409 to reach the airport station at Pearson International Terminal 1.

The $C 456m 30-year build and maintain concession for UP Express has been tendered as an Alternative Finance and Procurement (AFP) project.

Services operate at 15-minute intervals with a journey time of 25 minutes, and Metrolinx Presto contactless smartcards can be used onboard offering a one-way fare of $C 19 ($US 15.30).

Services are operated by a fleet of 18 Sumitomo DMU cars, which are formed into two and three-car sets. The vehicles have been configured to enable straightforward conversion to electric traction if required. The Kitchener Line is likely to be one of the first Go Transit lines to be electrified and electrification of the airport branch would be included in this project.

The inauguration of UP Express coincides with the Pan Am and Parapan Am Games, which will be hosted by Toronto this summer.

The service is forecast to carry 2.35 million passengers per year by 2018 and remove 1.2 million car trips from the region's roads in the first year of operation.