THE premier of the Canadian state of Ontario Mrs Kathleen Wynne visited the site of the future Vaughan Metropolitan Centre station in York on June 6 to mark the completion of tracklaying on the Toronto-York Spadina subway extension. 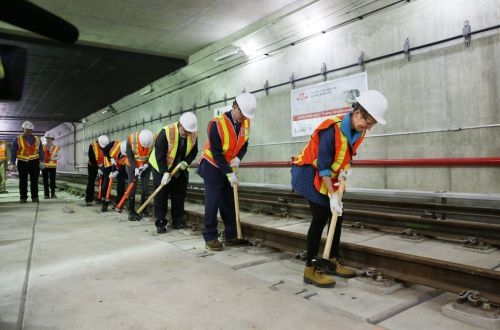 The 8.6km extension of Line 1 from Downsview to Vaughan Metropolitan Centre is expected to boost transit ridership in the Greater Toronto and Hamilton region by 36 million passenger per year, eliminating 30 million car journeys annually.

The $C 3.2bn ($US 2.5bn) project is being funded jointly by the Canadian federal government, the province of Ontario, the city of Toronto, and York Region.

The extension is due to open by December 2017 and will add six new stations to the network, including park-and-ride facilities at Finch West, Pioneer Village, and Highway 407.