THE United States Federal Railroad Administration (FRA) has issued a Request for Proposals (RFP) for 35 200km/h diesel-electric locomotives for use on inter-city and commuter services in Illinois, Michigan, Missouri, Iowa, Washington, California, and Oregon. 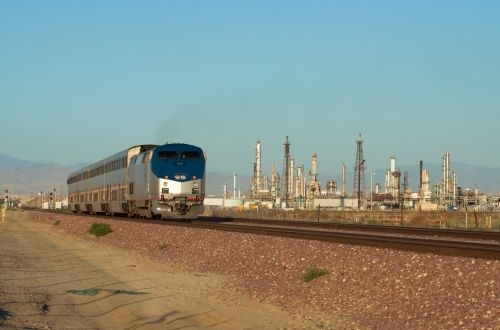 The new locomotives will be used on Amtrak services in the Midwest, the Pacific Northwest and California (pictured).
Photo Credit: David Gubler

The Illinois Department of Transportation is leading the procurement with the first deliveries expected in 2016. The FRA has allocated $US 808m to manufacture the 35 locomotives and 130 double-deck coaches, with the California Department of Transportation (Caltrans) awarding the American subsidiary of Sumitomo, Japan, the $US 352m coach contract in September 2012. The coaches are being built at Nippon Sharyo's plant in Rochelle, Illinois and are scheduled to be delivered between autumn 2015 and early 2018.

The RFP states that the locomotives should use ac traction motors and meet EPA Tier 4 emissions standards. The winning bidder for the locomotive contract will be announced in early 2014. Many of the new locomotives and 88 of the coaches will be operated on upgraded infrastructure between Chicago and St Louis, and Chicago and Detroit (IRJ January p28).

This is the second locomotive contract to be procured under the standardised regulations outlined in Passenger Rail Investment and Improvement Act (PRIIA) 205 specifications for the Next Generation Corridor Equipment Pool Committee. Southern California Regional Rail Authority selected EMD on May 31 to supply up to 20 F125 Spirit diesel-electric locomotives, which will also be designed to meet EPA Tier 4 standards, for operation on Southern California's regional rail service, Metrolink.