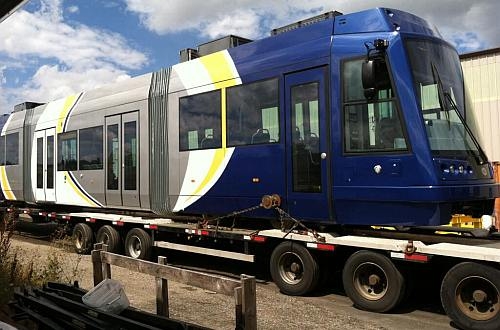 The 20.1m-long vehicle, which will accommodate up to 180 passengers, is due to arrive in Arizona by August 30, and a second LRV is scheduled to be delivered to the city in October, when testing is expected to begin. Delivery is six months behind schedule, but is taking place just days after Tucson finished major construction, including the installation of track and electrification.

Tucson Sun Link will run for 6.2km from Congress Street in Mercado to the city centre, University of Arizona, and Helen Street with 17 stations. The project includes the construction of a bridge over the Santa Cruz River at the western end of the line, and a depot near 9th Street station. Services will operate at 10-minute intervals during the peak and every 20 minutes at other times.

Commercial services are due to start in 2014 and the line will be operated by RATP Dev subsidiary RDMT under a three-year contract agreed last year.